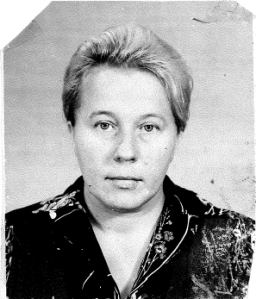 Mama was born a year and a half after the war, in a hastily-built hut on a dirt foundation. Her first childhood memory is of a lazy fat cockroach crawling in the half-darkness on the log wall.

Mama’s father returned from the front a nervous, impetuous heavy drinker. In the first year of the war he wasn’t yet eighteen. He was mobilized in ‘44, when his village was freed, and after a week’s training the young fighter was sent to free Pskov. On the twenty-second of June, Pskov was freed. Most of what remained of the tens of thousands of Granddad’s contemporaries, similarly trained and given the same assignment, languishes in the outlying regions to this day.

Mama’s mama lost her father in 1932. He died of typhoid. His death saved the family from property expropriation and exile to Siberia. The guys who had gathered at his place in the evenings and cursed the Soviet government no longer lived in their village by 1934.

Mama’s uncle, my granny’s older brother, graduated from a Party college and wrote a book called “In the Fox’s Hole” about the misdeeds of those land-owning farmers. He sent the book to a publisher and received a favourable response with a suggestion to rework some of it. He didn’t manage to rework anything; the war with Finland started, in which he was killed.

In June of ‘41, Granny was taking a bookkeeping course in Leningrad. Right after the war started she passed her final exams and went home — on foot. A few days after she got home, the Germans came to her village. At the end of August, in the middle of the night, Germans with skulls on their caps dragged Granny and her mother out of their house and led them to the church, where there were already a lot of other people. In front of Granny’s eyes, her mother and a few others were shot for helping guerillas. Granny was seventeen. She stood and stared at the body of her mother, until an older German — without a skull on his cap — put his hand on her shoulder and may have said, “geh, du arme Kleine”. Granny left. The next year she and Granddad registered their marriage at the local German occupation office.

Granddad was the fifteenth child in a family of sixteen children.

Mama’s younger brother was born three years after her. They called him Sasha. When he turned sixteen, his parents gave him his first rifle. He took up hunting. After the army he worked as a repairman at the collective farm. At the age of thirty-seven, in November, he put on his best sweater, which had cost eighty roubles, took his best rifle and went down to the river. Halfway there, he pointed the rifle at his chest and shot himself. He had never been married. He was the only year-round resident younger than forty within a radius of six kilometres.

After Granny saw his body lying across the path, she started to drink even more than life with Granddad had already accustomed her to.

For the first three years of school Mama walked to a neighbouring village three kilometres from home. After that she walked to a different village, at a distance of five kilometres. Besides her, her parents and her brother in the crowded hut with little windows, there were assorted other relatives. Almost every evening Granddad returned from work drunk. Sometimes he kicked everyone out. Sometimes he just beat his wife and everyone else — with whatever he could get his hands on. Sometimes he went to Gdov and brought Mama and her brother little cakes. One summer day he brought home a radio and turned it on. They were broadcasting an interesting programme about the great horticulturalist Michurin. For fifteen minutes Mama listened attentively, but then she wanted to go outside to play with a friend. Two hours later she came home and asked her father to turn the radio back on, so she could listen to the rest of the programme about Michurin. She thought that the radio worked the same way as a gramophone. She was eleven years old.

After the seventh year of school Mama was sent to Slantsy, to her auntie’s, Granddad’s sister’s. Auntie’s husband drank almost every day. Sometimes he beat Auntie — with whatever he could get his hands on. Mama was a good pupil, but wasn’t exactly a model child. When, at the Slantsy cinema, they showed the film “But What If This Is Love?”, she persuaded almost the whole class to skip the last two lessons of the day, so they could all watch it together. She was sent to the headmaster, but she always read all the classics and wrote good essays.

For her last year of school, Mama studied in Gdov. She finished school with top marks in Russian, literature, and several other subjects and wanted to enrol in the philological department at the Pskov Pedagogical Institute. She was the daughter of a collective farmer and didn’t have a passport. But it was The Thaw. They started to give passports to collective farmers. Mama passed the entrance exams with “excellents” and they accepted her.

Granddad didn’t want Mama to study at the institute. Granddad had finished four years of school and considered higher education a pointless whim. When Mama came home for holidays, she weeded the garden plot, participated in the haying, carried water, milked the cows and cleaned the cowshed. During any free time Mama sneaked off to the attic and read books. Most of all she liked Pushkin, Lermontov, Yesenin, Turgenev, and Lev Tolstoy, although Mama had tossed aside “War and Peace” at the end of the second volume and didn’t return to it until she enrolled at the institute. She couldn’t deal with the fact that Natasha wanted to replace Prince Andrei with the brainless idiot Kuragin. She threw the book into the farthest corner of the attic and cried for a long time.

After work, at night, Mama went to the dances, five kilometres away. At the dances nobody kissed anyone else. The local youths drank wine — as a rule, one bottle for six people.

During her studies Mama lived in a dormitory, in a huge room with fifteen other young women. On stipend day, the stipend consisting of 25 roubles, she bought several books and loose chocolates in a little cellophane bag. She really loved to eat the chocolates with bread. In the cinema they showed the film “Once More About Love”, in which the still-young Doronina loved the still-young and irresistible Lazarev at the beginning, and then died saving the passengers of her airplane because she was a real Soviet stewardess. Mama went to see this film many times, and every time sobbed so hard that her friends had to calm her down. Sometimes Mama and her friends went to Leningrad — twelve hours there on the train, twelve hours back — to watch a play at the Bolshoi Drama Theatre or at the Komissarzhevsky Theatre. She also kept a diary and wrote poems. Sometimes she wrote tales of humble young women who loved noble men. One of her professors openly courted her, but she loved a young man with an ugly surname. They strolled around Pskov, went to the movies and didn’t have sex.

After finishing the institute, Mama was assigned to the middle of nowhere near Belarus. During the day she taught everything that they didn’t have enough teachers for: German, geography, drawing, singing. At night she was scared, because drunk men were always knocking on her door. Then she was assigned to Strugy Krasnye. When she was twenty-four, she went to visit her parents and broke her leg. In the Slantsy hospital, where they put the cast on, she met Papa. He also had a broken leg.

They got married in Leningrad. Not long afterward, Papa’s second wife brought charges against him and Papa went to jail. Mama came to visit him from Strugy Krasnye with parcels. When Papa got out of jail, they lived in Luga for about a year, but then they moved to Slantsy, to the house where Papa’s mama lived. Her husband had been killed in action in ‘42, and her parents were burned to death in ‘43. The house had been built by German prisoners-of-war. The residents of the house relieved themselves in the pail in the corridor and did their business outside, around the corner. The flat consisted of one room, one kitchen and one round stove. As for the collected works of Dostoevsky, Tolstoy, Turgenev, Leskov and the rest, which Mama had brought with her, her mother-in-law said to put them in the shed, so they wouldn’t cramp the living space. After a few years mould and rats reduced them to slimy rotten pulp.

Mama started work at the preschool located nearby. She wanted to have a baby, but nobody else wanted children of any kind. Mama had three abortions. When she turned thirty-two, she got scared and decided not to have any more. She had a baby, went to teach at a school and started her book collection anew.

Papa and Mama have different Rh-factors. When the baby was born, one of the attendants, thinking that the birthing mother was unconscious, said “well, this one isn’t going to make it”. Mama heard. But the baby was going to live. This became certain after a month.

After childhood, youth, Cuba, two marriages, jail and the early-morning shift, Papa always drank a lot and was subject to fits of infinite rage. But when he turned up under her window at the birthing hospital, Mama somehow crawled to the window and said that she wanted to name the baby in honour of his father. Papa has an ignoble-sounding German name. He shook his fist, and I was named in honour of Granddad.

Mama is often in a sentimental mood, and when she is, she says “nevertheless, I had you”. As mamas will, she believes that her offspring, in this case me, is worth it all. Probably I have a responsibility to be worth it all. In any case, it’s the only “responsibility” in which I believe. I believe there are only two people who can demand anything of me. Let all the ex-Party, ex-KGB bastards shooting their mouths off on television go to hell. I don’t give a fuck about their great fucking state.