When the Russian Ministry of Defence isn’t busy parading missiles through central Moscow or invading Ukraine and Georgia, it maintains a really good online database of Soviet soldiers who died in World War II. Yesterday I finally did a search for my dedushki, grandfathers, and yet again discovered that you can literally find anything on the internet.

You see, when I searched for Dedushka Lyosha, I found scanned copies of my great-uncle’s letters to his sister, my grandmother Olya, written in early 1944. It was probably from one of those letters that she first learned that her husband had died three years earlier.

I am going to quote both letters at length below, but first a bit of context. 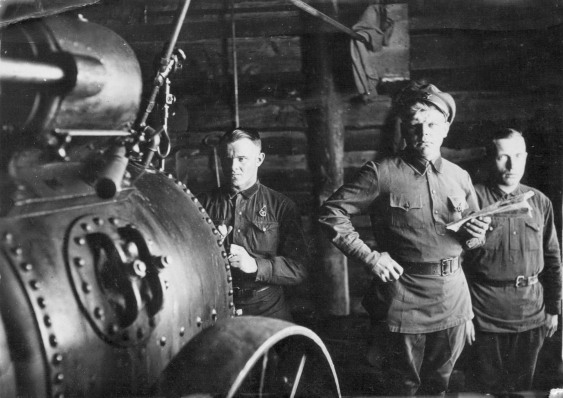 Ded Lyosha is the guy in the middle.

Ded Lyosha, Granddad Lyosha, was called up on 23 June 1941, one day after Nazi Germany invaded the Soviet Union. He was a military mechanic. A few weeks after that, the area where he and Grandmother Olya lived was occupied by the Germans. The Germans didn’t leave until early 1944. For nearly three years, Babushka Olya had no idea if her husband was dead or alive.

Nor did she have any communication with her brother Kolya, who had also been fighting since 1941. Apparently, this is the first letter she received from him, shorty after the Soviet postal service was restored in their village.

Unfortunately, I can’t really convey the flavour of my great-uncle’s Russian. His writing is typical of a farm boy who never got much education but was taught enough to believe that one is supposed to write “like they do in the books”. As a result, his Russian is a heart-breaking mix of misspellings, officious clichés, purple prose, and “non-standard” case endings from his native dialect. My grandparents’ generation was one of the last to grow up before Soviet schools and mass media steamrolled much of regional variation within Russian out of existence.

Here is then an English approximation of what Great-Uncle Kolya writes to his sister some time in late February or early March 1944:

“Dearest sister Lyolya [i.e. Olya] so far I am alive and well. I reside very far from you and I am not doing too badly, in fact given the times we live in I am doing fine.

My dearest sister Lyolya I am writing to inform you that – I can hardly bring myself to write these words but you too must muster all your courage and your will – that your beloved husband Lyonya [i.e. Lyosha] died back in late 1941 in Leningrad Oblast in the Khvoynaya district.

Mind you I did not see him myself, but I went to Khvoynaya once and so this chap from the village of Podoklinye comes over and asks, are you from Krasukha he says, and I says yes, and so he told me that my sister Lyolya had married her a chap from Volyshovo by the name of Aleksey Andreev, and he said that he died and was buried at the cemetery, and I went to look for the grave but did not find it because there is lots of people buried there in mass graves and some are missing names, this is why dearest sister I beg you as your only brother don’t be sad, ain’t nothing you can do about it now, and please understand you are not the only one to suffer this fate, and now take good care of your health and raise your lovely children.

Lyolya a chap named Kolya Baranov … serves in the same regiment as Lyonya [your late husband], so if you did not receive no notification about Lyonya[’s death], … get his address and write to the commanding officer and he will reply, and you will get a notification and you and the kids will get awarded a pension.

Well my dearest sister Lyolya let us be strong and make it through this great tragedy that befalls us. Give my regards to your mother and father. Goodbye I hug and kiss you and your little boy Rudya [i.e. my dad] and your little girl Tamara.

As I wrote this my eyes were hardly ever dry. Please write, that’s all for now.

Some time in March 1944, Grandmother Olya receives her brother’s letter and writes a reply. In her letter, she apparently tells him that their mother, Maria, as well as Kolya’s two young daughters and about a dozen other relatives were killed a few months earlier, when the Germans burned down Krasukha, their home village, along with its entire population of 280 people. She also tells him that their youngest sister, Zina, survived the massacre (she wasn’t in the village that day), but later she was captured and sent to Germany as a forced labourer.

On 8 April 1944, Great-Uncle Kolya writes his second letter. His written Russian syntax is even more of a mess this time; emotions clearly get the better of him:

“Good day dearest sister Lyolya and your little boy Rudya and your little girl Tamara. I send you my Red Army greetings and wish you a fine new life and the best of health, dearest sister I received your letter and as I read it tears would not let me read everything right away that it fell to our beloved mother and my dear little daughters Galya and Nadya to die such a terrible death, and to all of our friends and family.

Lyolya please describe me about our sister Zina (опиши мне об нашей сестрицы Зины) how she chanced to escape such a terrible death, but what worries me is that she is still in the enemy’s lair, and her consequences no one knows if she will survive (последствия её неизвестно придетсяли спастись ей). 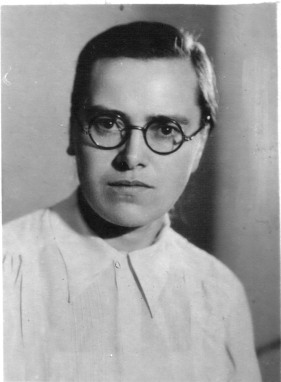 Great-Aunt Zina survived the war and went on to work as a teacher. This picture was taken in the 1950s.

Lyolya please describe if while during the German occupation you had the chance to visit Mother and how her health was and my sweet little daughters’ health and how they was doing. Lyolya write also where they buried all our friends and family, so at least I know their grave, they who died a heroic death (хотябы знать их могилу которые погибли геройской смертью). Dear sister I cannot say I was surprised by the fate of our whole village, for I have been to many places and a lot of people have died the same terrible death at the hands of the German murderers, who will all to a man pay with their filthy skins for their heinous crime.

Lyolya I received a letter from Uncle Vanya from the village of Turitsy, he says that they are all alive and well and they ask me to write them letters, but of course I will write, for Aunt Palasha will be to us like a second mother.”

So that’s what I found on the internet on Victory Day. To say that it was a highly emotional experience is a serious understatement. For a few minutes, I felt like I was in some time-travel series on Netflix, suddenly transported to a past that was supposed to be forever lost. At first I couldn’t even figure out how on earth those letters had ended up online.

Then I saw the last document attached to Grandfather Lyosha’s entry in the database. It is an official form filled in by a Soviet military office (военкомат) in 1946. The form states that after considering the evidence the relevant authority hereby concludes that my granddad died in active service on 11 October 1941. Great-Uncle Kolya’s letters to Grandmother Olya – along with a short letter from a man who served in Grandfather Lyosha’s regiment – must have been archived together with that form as the evidence in question.

The fact that the Russian Defence Ministry had a lead on me in digitizing my own family history forced me to get my act together. In other words, last night I finally scanned the most unrelentingly tragic historical document in my possession.

The document is written in Grandmother Olya’s hand on a few flimsy pre-Russian-Revolution postal forms for keeping track of delivered packages. Except, instead of logging packages, Grandmother Olya used the paper to keep track of what happened to her extended family. Some time in 1944, she sat down and wrote this (полная расшифровка русского текста есть здесь):

“A RECORD OF HISTORICAL EVENTS

She begins by noting the name days of her in-laws and her husband, along with her own.

Then she moves on to the historical events:

“My husband Aleksey Alekseevich Andreev, b. 1912, died during the war for our motherland on 11 October 1941.

My dear mother Maria Vladimirovna Vasilyeva, aged 60, died tragically during the war for our motherland on 27 November 1943 at 9 o’clock in the morning [the day of the Krasukha massacre]. My nieces Galina Vasilyeva and Nadezhda Vasilyeva died [on the same day]. Galya was 11, Nadya was 9.

My relatives who died tragically [on the same day]:

My cousin Vasily Aleksandrovich Fogol’, aged 15, was killed by a tree in the Nikandrovsky forest in February 1942.

My dearest beloved little sister Zinaida Ivanovna Kutuzova, b. 1920, was sent by the enemy into forced labour in Germany in early February 1944, along with my cousin Elena Aleksandrovna Fogol’, aged 17.

Aunt Aleksandra Semyonovna Vasilyeva, aged 38, and her children Yura, Tasya, Valya also died tragically [in the Krasukha massacre]. Her oldest son Shura, aged 15, has been sent by the enemy into forced labour in Germany.

Uncle Vladimir Vladimirovich Vasilyev, aged 38, died tragically during the war for our motherland in May 1944.

This last bit (“Having spent 6 months in bed”, Пролежав в постели 6 месяцев), added as an afterthought, after a full stop, is one of the most chilling uses of a past adverbial participle I have ever seen in Russian. The image that it conjures up – of Grandmother Olya tending to her bed-ridden father-in-law on top of doing farm work, taking care of the kids, and coming to terms with losing most of her family – is almost unbearable.

Babushka Olya before the war

And then of course there is Aunt Palasha from the penultimate entry. Until yesterday I had no idea who she was. Now the one thing I know about Aunt Palasha is that, according to Great-Uncle Kolya, she was supposed to be “like a second mother” to him and Grandmother Olya, and that she died two months after Great-Uncle Kolya wrote that phrase. 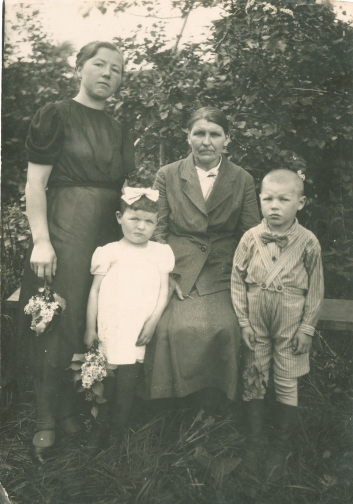 Babushka Olya with her children and mother-in-law in May 1945, a few days after the end of the war in Europe

I will end on a somewhat more cheerful note though.

Yesterday, while I was searching the database, I also found an entry for my other grandfather, dedushka Kostia. The entry contains military records suggesting that Grandfather Kostia was killed in action and buried in a mass grave in April 1944. This find was a weird mix of unsettling and exciting – for the simple reason that Granddad Kostia Zarubin did not, as a matter of fact, die in the war.

I’m not sure who made the mistake – those who made the original record back in 1944 or those who interpreted it for the database. Or is this a glimpse of an alternative timeline (as Megan Case immediately suggested), one in which my mother and I were never born? The alternative timeline hypothesis does have something going for it, namely the fact that the name of Grandfather Kostia’s village and his wife’s surname are both misspelled in a way that could easily be correct if the world was a little different: Krapivka instead of Krapivno and Baranovksaya instead of Baranskaya (Grandmother Valya never changed her maiden name to become Zarubina).

Be that as it may, in this timeline Grandfather Kostia definitely made it through 14 months of fighting more or less physically unscathed. Eventually he got decorated with a bunch of medals and died on his favourite couch in 1993.

He never talked about the war.